(UPDATE, 8:12PM: It is very possible that the very precise-sounding "estimated outstanding ballots" from this morning was wildly incorrect with regards to Pima County.  If there are still thousands of ballots left to count this weekend or on Monday, there may still be a chance for Barber to catch up.)

Martha McSally has defeated Rep. Ron Barber (D-CD2), as both Pima and Cochise counties reported processed ballots after 5pm.  The vote totals as of 6:41pm tonight are 105,687 for McSally, and 105,178 for Barber.

The automatic recount threshold is 200 votes.

Barber narrowly defeated McSally in 2012.  McSally had lost in the GOP primary earlier that year in the special election to replace Rep. Gabrielle Giffords, who had retired after surviving an assassination attempt that left six people dead and 13 injured.  Barber had been among those injured; he was Giffords' District Director.

Based on those numbers, there cannot be enough ballots remaining (if any) to change the outcome. 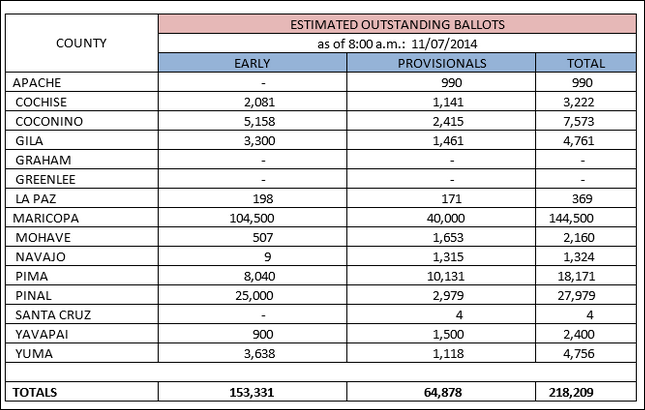 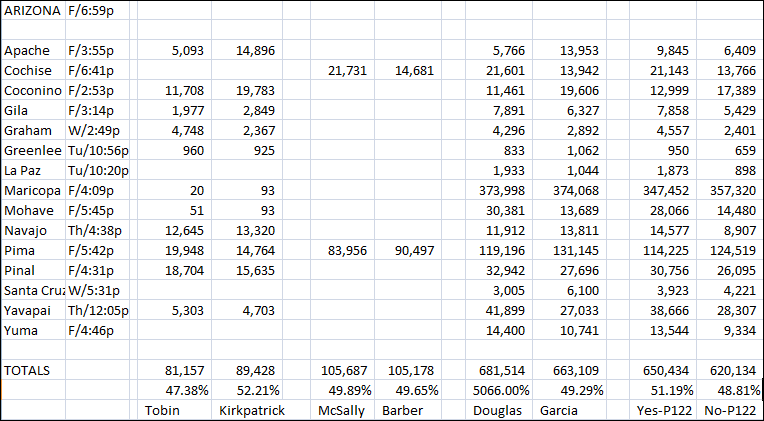 We welcome your comments about this post. Or, if you have something unrelated on your mind, please e-mail to info-at-arizonaspolitics-dot-com or call 602-799-7025. Thanks.
Posted by Mitch M. at 7:49 PM

I am an American man, and I have decided to boycott American women. In a nutshell, American women are the most likely to cheat on you, to divorce you, to get fat, to steal half of your money in the divorce courts, don’t know how to cook or clean, don’t want to have children, etc. Therefore, what intelligent man would want to get involved with American women?

American women are generally immature, selfish, extremely arrogant and self-centered, mentally unstable, irresponsible, and highly unchaste. The behavior of most American women is utterly disgusting, to say the least.

This race is FAR from over. It's unclear how many Early Ballots Pima county has left to count. Media reports have varied from 2000 to 8000. Sadly, Pima County failed to update their tabulated votes spreadsheet here: http://webcms.pima.gov/UserFiles/Servers/Server_6/File/Government/elections/pdfs/8-14%20early%20ballots%20processed.pdf so we're just guessing.

Howvever many those may be, they are apparently "earlies" that couldn't me machine tabulated.

Ignoring the earlies since we don't know how many there are, what we do know is that there are 10,000 provisional votes to be tabulated in Pima County. Assuming 8500 of those are valid (85% of provisionals were accepted in 2012) and further assuming that 65% of them are in CD2, that leaves us with 5525 provisional ballots in CD2.

Too many unknowns (especially number of uncounted earlies) to make any kind of prediction, except that it's going to be a nailbiter, WAY tighter than 2012, and an automatic recount if the margin is under .1% (approx. 220 votes) is looking like a VERY real possibility.

Thank you, James. The apparently-premature conclusion last night was not a prediction; it was based on apparently-erroneous numbers reported Fri am by the Secy of State's Office. Before posting the article, I looked for Fri afternoon/evening updates on how many ballots were left to process. Finding none, I relied on the SoS #s, did the arithmetic, and conditioned the conclusion on there being few if any ballots left to count. (18,171 less 16,118 votes counted...less unknown # determined to be uncountable = 2,000 or less).

I am seeking an explanation from county and state officials as to the Fri am discrepancy. It could have implications for more of the numbers, too.

I continue to obsess about this race and crunch numbers.

It *appears* to me at ALL Early Ballots have been tabulated. If you add the "Total to Count" and "Dup Ballots Sent to Count" colums and subtract the "Total to Duplication" you get the final number of 203011. So my guess is that the discrepancy of 3122 between the "Total from V.R." and "Total Counted" is rejected and duplicated ballots.

I've convinced myself that Pima's Early Ballot count is complete with the 509 McSally lead standing going into the Provisionals.

Comes down to whether the provisionals more closely follow election day polling place results which favored McSally, even in Pima or the Pima Early vote which favored Barber.

Either way I think an automatic recount is a safe bet at this point.

I was wrong about what "duplicates" meant on the Pima County spreadsheet. Apparently they're ballots that can't be scanned so have to be duplicated by hand.

So it would appear that there are 3065 duplicates to be counted and it also appears that batch Q4 of 145 mailed ballots that the recorder found yesterday haven't been tallied either.

Keys to his win are the total breaking above 65% CD2 in duplicates and provisionals, provisionals validating higher than 85%, and the split overall breaking better than 52/48 in his favor. Or for the Pima Recorder to keep finding mailed in ballots. :)

Thanks for your close review of the spreadsheets, and for your calculations. Obsessiveness definitely helps when it comes to vote counting! (I've reported on and/or observed vote counts in Pima and Maricopa counties over the years, and find my number-crunching yen is more than satisfied.