One of the three remaining major Democratic Presidential candidates has begun negotiations with the NBC television network for equal time following Hillary Clinton's appearance on "Saturday Night Live" ("SNL") earlier this month. NBC asked for proof that both Clinton and Larry Lessig are legally-qualified candidates for President. 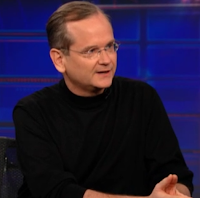 Phoenix station KPNX (Ch.12) is among the 47 NBC affiliates across the country to receive formal equal time requests within seven days after the October 3 broadcast.

(Arizona's Politics was the first to report on and publish NBC's "Sunday Morning Memo" (Oct. 4), in which it advised stations to place a notice in their FCC political files and to advise the network of any requests.)

Larry Lessig made his request for 3:12 of airtime* in a letter dated October 10, and emailed/faxed to station managers at NBC affiliates in the top 35 TV markets and all NBC affiliates in the states where the first four Democratic caucuses or primaries will take place this coming February.

NBC responded two days later, asking for proof that both Clinton and Lessig are legally-qualified candidates for President. Lessig's attorney replied with documentation showing the extent of the Harvard law professor's campaign efforts.

The reply addressed the question of Clinton's qualifications with "surely, you can't be serious." He goes on to point out that she is "the most famous non-incumbent to run for President of the United States at least since Dwight David Eisenhower in 1952" and other reasons that if Clinton does not qualify, "then no one in America is running for President right now." (see, below)

The FCC (Federal Communications Commission) explained to Arizona's Politics earlier this month that it leans toward taking a restrictive view on who qualifies for equal time AND where. It is possible that its determination (if one is requested) would be that only affiliates in New Hampshire (affiliates from neighboring states), Iowa and maybe South Carolina or other early-voting states would be required to provide the equal time, according to the FCC.

Lessig's attorney, Adam Bonin, tells Arizona's Politics that although the stations themselves have the equal time responsibility and that they have received responses from some of the 47, they are "relying on the network to represent them all."

The outcome of Lessig's request is no doubt being closely watched by the campaigns of the dozen-plus GOP candidates who could request equal time after Republican front-runner Donald Trump HOSTS SNL on November 7.


Here are the links to our 1st three articles:1. Breaking the NBC Sunday Morning Memo re: Clinton's appearance: bit.ly/AZp1177

(Please click below to review the equal time correspondence between Lessig's campaign and NBC.)

* The campaign rejects the idea of SNL plugging Lessig into an SNL comedy sketch for 3+ minutes, instead asking for an unfiltered block of time to express his views. While this might make for interesting negotiations and/or legal discussion about what constitutes "equal" - Clinton's skit was not unfiltered - Bonin points out to Arizona's Politics that "I think it would raise serious First Amendment and practical issues to demand that a scripted comedy show incorporate a candidate. That's not what the law has ever required."

We welcome your comments about this post. Or, if you have something unrelated on your mind, please e-mail to info-at-arizonaspolitics-dot-com or call 602-799-7025. Thanks.
Posted by Mitch M. at 11:07 AM