President Donald Trump's Old Post Office LLC officially removed the lien and the lis pendens stemming from its failure to timely pay $2 Million to the electrical contractor for work done last year on its new hotel, Arizona's Politics has learned. The taxpayers own the property and lease it to Trump*.

The lawsuit was filed by Freestate Electrical the day before Trump was inaugurated as President. The Trump company's rush to open the luxury hotel near the White House two weeks before Election Day required contractors to incur significant added costs, according to Freestate's lawsuit. The bills were not timely paid, and contractors rushed to file liens on the property. Freestate was still unpaid, so it filed the legal action to enforce its lien.

Three other contractors separately had to file mechanics liens against T.O.P.O. LLC since November. All were (paid and) released in February and March (after hotel revenues began to roll in).

Freestate's legal action was due for a hearing at the end of this month. The dismissal was filed on Friday, and the releases of the lien and the lis pendens were recorded today (see, below). It is unlikely that the plaintiff settled for less than the balance due.

Arizona's Politics has requested comments from representatives of both Freestate and the Trump Organization, and will update this article as necessary. 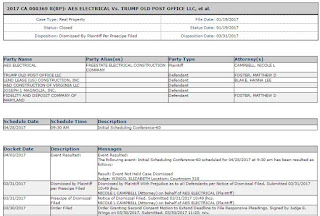 * Trump's interest may or may not be held in a trust and may or may not be able to access monies from the Trump Old Post Office LLC, per recent news reports. For purposes of simplicity, Arizona's Politics refers to "Trump" because he still appears to have a significant level of involvement and interest in the LLC.

We welcome your comments about this post. Or, if you have something unrelated on your mind, please e-mail to info-at-arizonaspolitics-dot-com or call 602-799-7025. Thanks.
Posted by Mitch M. at 2:25 PM