Those Facebook "Memories" reminders of past articles and posts are often interesting reminders. However, we rarely feel compelled to reprise them (although we do sometimes use them to spur follow-up articles). This video of Arizona Sen. John McCain honoring his then-retiring buddy Joe Lieberman warrants it. His voice catches a few times near the end, when he says that Lieberman "is as fine a friend as I've ever had and irreplaceable in my life, and I cannot let him go." The original post was December 20, 2012.

"He came here to do justice, Mr. President, to love mercy and to walk humbly with his God. It’s hard to find anyone here who doesn’t like and admire Joe. He’s impossible to dislike even if you only know him a little. Most of his detractors seem to be people who don’t know him and who tend to view people very strictly through the perspectives of their ideology and partisan identity. The only thing to resent about Joe Lieberman is that he’s so damn considerate of everyone that you can find yourself feeling a little ashamed when he catches you raising your voice to someone or behaving in other ways that fall short of his unfailing graciousness."

McCain added that he "nearly" nominated Lieberman to be his Vice Presidential nominee in 2008. (It was widely reported that McCain preferred Lieberman - who had been on the Democratic ticket eight years earlier - to eventual pick Sarah Palin.) 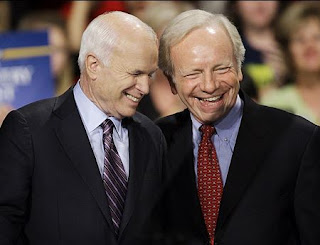 We welcome your comments about this post. Or, if you have something unrelated on your mind, please e-mail to info-at-arizonaspolitics-dot-com or call 602-799-7025. Thanks.
Posted by Mitch M. at 8:11 AM