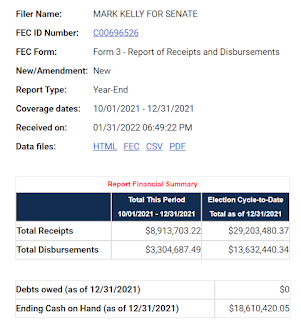 *******
Arizona Senator Kyrsten Sinema crushed her previous prodigious fundraising numbers in the 4th quarter of 2021, as nationwide publicity about the heartburn she was causing fellow Democrats was increasing.
Sinema raised $1.6M in the last three months of 2021, bringing her cash on hand to a staggering $5.8M. By contrast, her three previous cash hauls were $0.4M, $1.1M and $1.1M, respectively.
Sinema does not face a reelection battle until 2024. Some Democrats have begun fundraising to finance a challenger to her in the primary - generally considered to be either Rep. Ruben Gallego or Rep. Greg Stanton.
The entire report is not yet available on the FEC's website, but here is a snapshot: 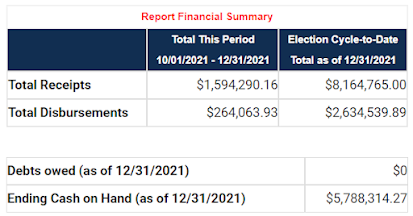 Perhaps of more interest will be what was happening next door with her leadership PAC. Sinema's "Getting Stuff Done PAC" took in an additional $477,000 - $340,000 of that from a wide variety of corporate PACs. And, she spent $274,000 of that, including trips to London, Paris, Thanksgiving at L'Auberge in Sedona and Christmastime on Miami Beach. There were also many purchases from various wineries totaling more than $6,000.
The list of corporate PACs was not surprising, as there has been other reporting - pharmaceutical and financial companies stood out, as did several from media interests (including $5,000 from the Fox Corporation PAC).
Page through the report to get a more extensive feel for Sinema's contribution base.
If you would like to show your appreciation for Arizona's Politics reporting, please consider donating to our pool to support OTHER journalism-related nonprofits.
We welcome your comments about this post. Or, if you have something unrelated on your mind, please e-mail to info-at-arizonaspolitics-dot-com or call 602-799-7025. Thanks.
Posted by Mitch M. at 2:50 PM