WATCH: Flake's and McCain's Senate Floor Speeches On Comprehensive Immigration Reform: "We Continue To Look For Ways To Improve the Legislation"

On Wednesday, Gang of Eight member and Arizona Senator John McCain (R-AZ) took to the Senate floor to try to reassure colleagues that he - and the "Group of Eight" - is trying to make comprehensive immigration reform "better and stronger".  He re-emphasized that the legislation is "absolutely needed" because the status quo is "de facto amnesty." 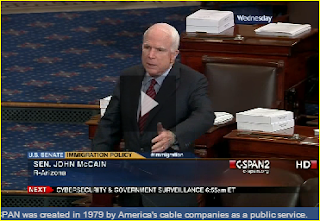 McCain became quite impassioned during this 15-minute speech.

One day earlier, Arizona's other Senator, Jeff Flake (R-AZ), also spoke in favor of moving forward with immigration reform, immediately after the Senate voted to move forward on the bill.  He urged everyone to not assign motives to those who speak out  in opposition, as "passions run high" on this issue.

We welcome your comments about this post. Or, if you have something unrelated on your mind, please e-mail to info-at-arizonaspolitics-dot-com or call 602-799-7025. Thanks.
Posted by Mitch M. at 8:16 AM