Arizona Senator Jeff Flake (R-AZ) delivered his first floor speech since moving to the U.S. Senate (from the House of Representatives) in January.  As he explained, it is tradition that new Senators are to esentially be seen and not heard during the first few months of their service.  They then make their maiden floor speeches (after which time they can be as long-winded as their colleagues).

Here is Sen. Flake's 11-minute speech.  The text is below the jump. 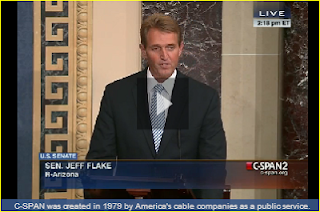 “The Senate, I am learning, is an institution bound by tradition and precedent.  One of the time-honored and worthwhile traditions in this body is that new senators are, for at least the first few months of their service, are to be essentially seen and not heard until they deliver their “maiden speeches” on the Senate floor.   This, Mr. President, I am doing today.

As an aside, in the same vein of new senators traditionally not being heard but seen, I may have been well advised for the first few months to avoid the throngs of reporters who congregate outside of this chamber, but it’s too late for that.  Politicians, after all, can only heed so much advice.

For the past 12 years, it was my privilege to serve in the House of Representatives, a body that has its own traditions and precedents.  At its core, the House is governed by the concept of majority rule.  One party can have a majority of only one or two and, by virtue of the rules, can maintain control of that chamber.  During my time in the House, I had the experience of being in both the majority and in the minority.  All things equal, I preferred the former, but I understood that the power wielded by being in the majority is fleeting.  That is as it should be.

The Senate, on the other hand, is a body governed by consensus.  The party holding the gavel is on a short leash.  Bringing even the most non-controversial resolutions to the Senate floor requires the agreement, or at least the acquiescence of the minority party. Over the past decade, both parties have chaffed under these arrangements.  Both parties have at times considered changing the rules that would in some measure make the Senate more like the House.  Both parties have wisely reconsidered.  The House has rules appropriate for the House.  The rules of the Senate, however frustrating to the party that happens to wield the gavel, are appropriate for the Senate.

I come to this point with great appreciation for those Arizona senators who have preceded me.  The 48th state in the union, Arizona celebrated its centennial just last year.  Prior to my swearing in this year, Arizona had sent just 10 senators to this body.  These Arizonans who came before me have left more of an impression than simply carving their names in these desks.  Few in this body have matched the longevity of Carl Hayden.  Few have had the lasting impact of Barry Goldwater, who helped launch a conservative movement.

I consider it a high honor to follow in the footsteps of Senator Jon Kyl, whose steady, principled leadership shaped Arizona for the better and made our nation stronger, and more secure.  My constituents now call the same telephone number I answered as an intern for Senator Dennis DeConcini.  He taught me a great deal about constituent service.

And now I have the incredible honor to serve with Senator John McCain, who as a prisoner of war taught us all the meaning of sacrifice.  Since that time, he has served Arizona, the country, and the Senate nobly and honorably.  Fortunately for all of us, his service to this institution continues.  It is my great privilege to serve with him.

The challenges America faces today are legion and growing.  Abroad, cells of terrorists bent on our destruction continue to incubate.  Some receive aid and comfort from countries with long held grievances and irreconcilable enmity toward the United States. Other terrorists take advantage of failed states and lawless regions to hatch their plans.

But it is not just individual terrorists or terror cells that we have to worry about.  Countries unbound by the norms and conventions of traditional nation-states now threaten the peace.  Today, our concern is primarily focused on Iran and North Korea, but myriad other countries are but one election or coup removed from boiling over into regional and international instability.

Here at home, our fiscal situation is dire.  We continue to spend considerably more than we take in.  Worse yet, we have no serious plan to remedy the problem in any structural way.  We seem to endlessly lurch from cliff to crisis and back again, with fiscal high wire acts that erode the confidence of markets and invite the distain of our constituents.

It is understandable that with two-year election cycles, the House of Representatives begins to focus on the next election as soon as one election season is finished.  In the House, difficult issues are often avoided or perpetually shelved until the next election.

But here in the Senate we have six-year terms.  Senators, therefore, should come with an added dose of courage to take up the thorny and vexing issues on which the other chamber takes a pass.  It is our responsibility to lead, and if there was ever a time for this body, this chamber, the United States Senate, to lead, this is it.

I am a proud and unapologetic conservative, and a Republican, and I hope my votes will consistently reflect that philosophy.   So I am not suggesting that we hold hands and agree on every issue, or even most issues.  There are profound and meaningful differences between the parties.  But I want to spend more time exercising my franchise while debating the legislation itself, and less time on deciding whether such legislation should be debated on the Senate floor.

This country yearns for a functioning Senate, a Senate that recognizes the gravity of our fiscal situation and its responsibility to propose and adopt measures to solve it for the long term.   This country yearns for a Senate that exercises its prerogative as part of the first branch of government, to rein in executive branch excesses in both domestic and foreign affairs.

Domestically, the parade of missteps and abuses at the IRS and other federal agencies stand as exhibit A of the need for more robust legislative direction and oversight.  Recent presidents both Republican and Democratic have exercised authority in the foreign arena far beyond that contemplated for a commander in chief, often obligating future congresses to financial commitments far beyond security arrangements.   A better functioning Senate, less distracted by games of shirts and skins, would not countenance such theft of its authority.

Now is not the time, Madam President, for this institution to retreat into irrelevance, where the sum of our influence is to sign off on another continuing resolution to fund the government for another six months.  Where success is measured by how well our tracks are covered when the debt ceiling is raised.  Where prioritizing spending cuts are avoided by invoking another sequester.  No, we’ve been there, done that.  It’s time now for the Senate to lead.

There are encouraging signs that we may be moving in this direction.  Earlier this year, a budget was passed by this chamber.  It wasn’t a budget that I preferred, but I was given ample opportunity to offer and debate amendments to that legislation, as were my Republican colleagues.  We came up short.  But at least the Senate got back to regular order.

In the coming weeks this body will consider an immigration bill.  Immigration reform has been and remains a complex and vexing issue with members holding strong and discordant views on many of its facets.  Still, the bill, having had a thorough vetting in committee, will be allowed to come to the Senate floor to be debated, amended, and hopefully improved upon.  This is the way it should work.

To conclude, Madam President, a few days after last November’s election, the twelve newly elected Senate freshmen were invited to the National Archives.  We were taken to the legislative vault where we viewed the original, signed copy of the first bill enacted by Congress, as well as other landmark pieces of legislation and memorabilia.  Oaths of allegiance signed by Revolutionary War soldiers, witnessed by General Washington, documents and artifacts related to the civil war, segregation and women’s suffrage were also on hand.

It was an affirmation to me of the tumultuous seas through which our ship of state has sailed for more than 200 years.  We have had many brilliant and inspired individuals at the helm, and trimming the sails along the way.  We’ve also had personalities ranging from mediocre to malevolent.   But our system of government has survived them all.

Serious challenges lie ahead, but any honest reckoning of our history and our prospects will note that we have confronted and survived more daunting challenges than we now face.  This is a durable, resilient system of government, designed to withstand the foibles of men, including yours truly.

Madam President, it is the honor of a lifetime just to be here in this storied institution – more than I could have ever hoped for.  My modest hope going forward is that my contributions will in some small way honor the Senate’s storied past and help it realize its full potential as the world’s most deliberative body.

Thank you. I yield the floor.”


We welcome your comments about this post. Or, if you have something unrelated on your mind, please e-mail to info-at-arizonaspolitics-dot-com or call 602-799-7025. Thanks.
Posted by Mitch M. at 12:42 PM