Arizona Reps. Kyrsten Sinema (D-CD9) and Ron Barber (D-CD2) took a weeklong trip to Israel in August, meeting separately with Prime Minister Benjamin Netanyahu and Palestinian Authority President Mahmoud Abbas and wrapping up with a tour of the Israel-Syria border.

The trip, which permitted Democratic* lawmakers to bring their spouses or partners, was sponsored by an arm of the well-known pro-Israel lobbying organization AIPAC ("American Israel Public Affairs Committee").  For Sinema, it was at least her second trip to Israel as part of an elected officials' delegation, and the first for Barber.  (Sinema was in the Arizona Legislature for several years before being elected to Congress in 2012;  this is the first elected office for Barber.) 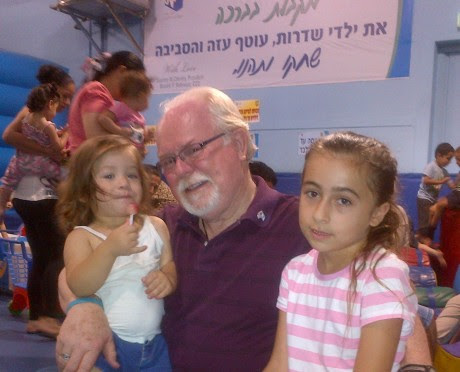 AIPAC made headlines this past week when it announced that it would pull out all the stops to try to convince Congress to support the resolution approving limited force against the Syria government as punishment for using chemical weapons on its own civilians.  To date, Sinema is listed as a "leans no" and Barber as "undecided" on the eventual** resolution.

AIPAC believes that not taking action to punish Syria's government at this point will send a strong message to Iran and Hezbollah that the U.S. will allow it to further pursue (and ultimately, to use) nuclear weapons.


*A group of Republican lawmakers traveled to Israel for a similar (but, not identical - there's an interesting sidebar) itinerary the following week.  No Arizonan GOP lawmakers went this year, perhaps because of the skinny-dipping "news" that had come out of last year's delegation.

** The actual wording of a resolution - specifically, in the House - is not yet finalized.

We welcome your comments about this post. Or, if you have something unrelated on your mind, please e-mail to info-at-arizonaspolitics-dot-com or call 602-799-7025. Thanks.
Posted by Mitch M. at 7:56 AM