Showing shrewd(?) political chops, the Syrian Congress has sent a letter to members of the U.S. Congress twice quoting President Franklin D. Roosevelt in an effort to convince Congress not to authorize a strike against the Syrian government in response to last month's chemical weapons attack.

Talking Points Memo obtained a copy of the 4-page memo from the Syrian Assembly's Speaker, Mohammad Jihad al-Lahham, and posted it on its website.  (We have re-posted it below.)

Besides leading off with a quote from Democratic President (1933-45) FDR (that he never spoke*) about the need for peoples around the world to build "human relationships" to achieve peace, the Syrian Speaker uses another FDR quote taken completely out of context: "I ask you to judge me by the enemies I have made."** 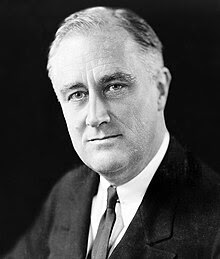 Of course, the latter quote is used in the letter to emphasize that both the U.S. and Syria are enemies of al Qaeda, and therefore should be working together.  The quote smacks of the proverb that is widely - but, not universally - believed to be Arabic in origin: "The enemy of my enemy is my friend."

The letter does go on to also try to make the claim that the Syrian rebels might be responsible for the August 21 chemical weapons attack that killed more than 1,000 civilians, and that the U.S. and Syria "should be walking the road to peace and truth together."

*  " Today we are faced with the preeminent fact that, if civilization is to survive, we must cultivate the science of human relationships -- the ability of all peoples, of all kinds, to live together and work together, in the same world, at peace."  This quote comes from a speech that Roosevelt wrote on April 11, 1945, the night before he died, to be delivered three days later as a nationwide radio broadcast honoring Jefferson Day.  You can read the text here.  He was looking past the end of WWII, to building the peace afterwards.  He references "science" as he notes that President Thomas Jefferson had been a distinguished scientist who was quoted as saying that science can bring the peoples of the world together.

** "Judge me by the enemies I have made."  This quote is from a speech that Roosevelt made in his first campaign for President ("The Portland Speech", September 21, 1932).  He was not speaking about international relations; rather, he was defending his record (as Governor of New York) regarding regulation of public utility companies.  Utility company executives had attacked his record, and he attempted to cast that as a badge of courage.