Within hours after Arizona Rep. Ann Kirkpatrick (D-CD1) announced that she is running against Sen. John McCain in 2016, State Senator Catherine Miranda (D-LD27) put out a news release saying that she is "strongly exploring" a campaign to replace Kirkpatrick.

The wide-ranging Congressional District 1 - which could be revised if the U.S. Supreme Court throws out Arizona's redistricting method next month - does not overlap with Miranda's current legislative district.  However, there is no requirement that a Congressperson reside in their district.

From Miranda's release:  “I am ballot-tested and count with a
strong crossover appeal from voters with different backgrounds and ideologies. I’ve
been an elected official serving the state of Arizona for many years. As a State
Representative and Senator I’ve been fighting for some of the most important issues
and challenges facing our state, siding at all times with the interest of working
families in Arizona”. 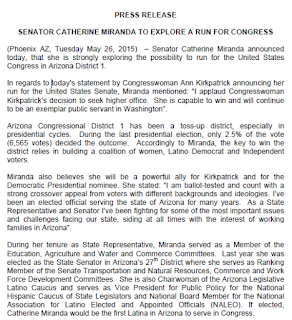 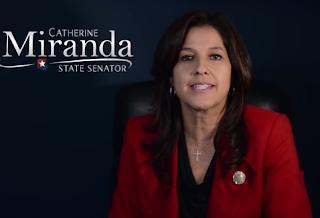 We welcome your comments about this post. Or, if you have something unrelated on your mind, please e-mail to info-at-arizonaspolitics-dot-com or call 602-799-7025. Thanks.
Posted by Mitch M. at 12:53 PM