(UPDATE: Arizona Rep. Martha McSally (R-CD2) was the only GOP member of the Arizona delegation to oppose the amendment to strip the Gallego DREAMer/DACA proposal.  Only 19 other Republicans voted "nay".)

(2nd UPDATE: Arizona Rep. Ruben Gallego just tweeted his disappointment in today's vote: "Disappointed to see that the GOP's war against immigrants continues. This is clearly still @SteveKingIA's GOP."   Meanwhile, fellow Arizona Rep. Paul Gosar (R-CD4) tweeted that he was "pleased" by the vote.  Both Reps. spoke during the 20-minute floor debate on the amendment.)

On a close (221-202) vote, the U.S. House of Representatives just stripped the Defense Authorization bill of an amendment proposed by Arizona Rep. Ruben Gallego (D-CD7) to encourage the military to permit DREAMers (aka childhood "DACA" arrivals) to enlist in the U.S. Armed Forces.

Arizona Rep. Martha McSally was one of only 20 Republicans voting to keep the DREAMer provision alive.  No Democrats supported the striking amendment.

The Gallego amendment had been passed by the House Armed Services Committee late last month.  Alabama Republican Rep. Mo Brooks proposed a floor amendment solely to strip out the DACA provision, telling colleagues that "Gallego’s amendment betrays Americans by encouraging the Secretary of Defense to hire illegal aliens rather than Americans.”

Here is the text of Gallego's proposal (section 538): "It is the sense of the House of Representatives that the Secretary of Defense should review section 504 of title 10, United States Code, for the purpose of making a determination and authorization pursuant to subsection (b)(2) of such section regarding the enlistment in the Armed Forces of an alien who possesses an employment authorization document issued under the Deferred Action for Childhood Arrivals program of the Department of Homeland Security established pursuant to the memorandum of the Secretary of Homeland Security dated June 15, 2012."

Here is the full copy of Brooks' letter blasting the DACA provision.

Earlier today, the Senate Armed Services Committee passed its version of the Defense Authorization; no word yet on whether it includes a similar provision. 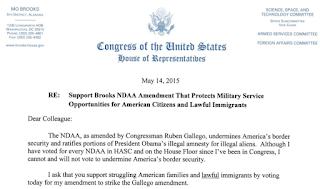 We welcome your comments about this post. Or, if you have something unrelated on your mind, please e-mail to info-at-arizonaspolitics-dot-com or call 602-799-7025. Thanks.
Posted by Mitch M. at 4:30 PM