The Arizona Supreme Court took the unprecedented step this month of hiring former Congressman John Shadegg to lobby for it at the federal level. The Court is hoping to lay the groundwork to be able to intercept federal tax refunds from state criminals.

The contract with the Arizona Supreme Court is the first time (per the federal lobbying database) that the Court has hired a lobbyist, and the first time Shadegg has lobbied for a State of Arizona entity.

Shadegg notes on his registration form that he will be lobbying for the Supreme Court regarding "issues relating to the interception of court ordered restitution, fines and fees."  Arizona does not currently have the right to intercept federal tax refunds from convicted criminals in order to fulfill restitution orders.

Arizona Supreme Court Communications Director Heather Murphy tells Arizona's Politics that Shadegg has been hired on "a very limited basis, for an amount of less than $10,000."  She notes that previous attempts to gain this important tool to collect restitution orders for victims have not made it far, possibly "due to inertia".

Murphy is not aware if other states have attempted or are attempting to do likewise. A search of the lobbyist database did not turn up any other states' Supreme Courts.

Shadegg represented Arizona in the House of Representatives from 1995 to 2011, and became a lobbyist with the law firm of Steptoe & Johnson two years later.  The Republican also lobbies for Facebook, Basis Schools and the Las Vegas Sands Corporation (Sheldon Adelson), although his two most lucrative lobbying contracts are presently for the National Association of Convenience Stores and the Society of Independent Gasoline Marketers.

Arizona's Politics discovered the lobbying registration today and has asked the Court and former Rep. Shadegg for additional details on the lobbying, and will update as warranted. 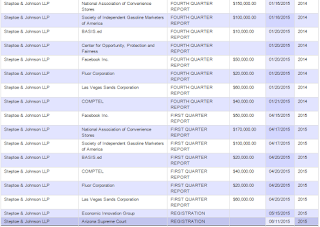 We welcome your comments about this post. Or, if you have something unrelated on your mind, please e-mail to info-at-arizonaspolitics-dot-com or call 602-799-7025. Thanks.
Posted by Mitch M. at 3:06 PM

Interesting that AZ Supreme Court is hiring a lobbyist. Is this the first time they have done so?

Yeah, I found it interesting, too, PJ! As I noted in the 2nd paragraph, it does appear that this is the first time that the Court has hired a lobbyist. (I searched the database several ways before I felt comfortable writing that. I also searched the word "supreme" to see if other states' Supreme Courts had lobbied. That turned up zero results, too!)