Maricopa County Sheriff Joe Arpaio and Phoenix Rev. Jarrett Maupin have received a lot of attention recently for their joint efforts. Today, they filed a complaint with the city of Phoenix that one reaction of "nude artwork" goes too far and is "vulgar, racially insensitive, homophobic and generally offensive."

At risk of being complained about, Arizona's Politics is going to publish this display. By clicking "Read More", you are certifying that you are old enough to view a non-explicit cartoon likeness of two local politicians.

Arizona's Politics - along with the rest of the media - received a copy of Rev. Maupin's "complaint" to the Phoenix Human Relations Commission, along with a picture of the "nude artwork" this afternoon....from the Sheriff's Office's communications staff.*

It claims that the "display" is being propped up against various pieces of city of Phoenix property (light poles, bus stop, street lights, etc), and that the city should do something about it.

We could continue to quote from Maupin's letter, but let's let you read the entire missive for yourself (before looking at the nude display, if you are mature enough).


Maupin and Arpaio received national attention this month when the former asked the latter to provide protection to Phoenix-area Black churches in the wake of the Charleston, SC massacre.  They also received their share of derision, including from both the Arizona Republic and the Phoenix New Times.

This mocking no doubt inspired the anonymous artist.

And that no doubt inspired the Reverend and the Sheriff to claim to be "victim(s)" of the life-size editorial cartoon.  (This is especially impressive given that two of today's lead stories are the Supreme Court's same sex marriage ruling and President Obama's eulogy in Charleston.)

Again, please make sure that you are old enough and mature enough to view the "nude artwork" below the jump. However, if you would like to complain about this article, please address Howard Kurtz, c/o Fox News; this would be guaranteed to keep his head spinning for weeks to come (and might get me an interview slot).

* Because the Sheriff used County employees and resources to broadcast this complaint, Arizona's Politics is considering him to be endorsing/signing on to the Reverend's complaint.

Please make sure you are of sufficient age and discretion before scrolling down. 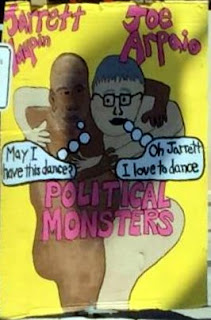 I risked only one eye. My right. Sadly the right side of my body has turned to stone.