IN PERSPECTIVE: Is Arizona Part of "the South" & the "Grim Block of Poverty", and Did Illegal Immigration Enforcement Contribute? (NEWS ANALYSIS, DIGGING DEEPER)

Arizona is now the western edge of "the South"?

The tweet - with a map and headline grabbing me simultaneously - literally forced me to look into the matter further.  Many people will see the news coverage over the next few days, and many will try to use it to score political points:  "The South Is Essentially a Solid, Grim Block of Poverty".  That was the headline on the liberal-leaning Huffington Post - I saw it tweeted and re-tweeted by two well-known professionals who have lived and/or worked in Arizona. 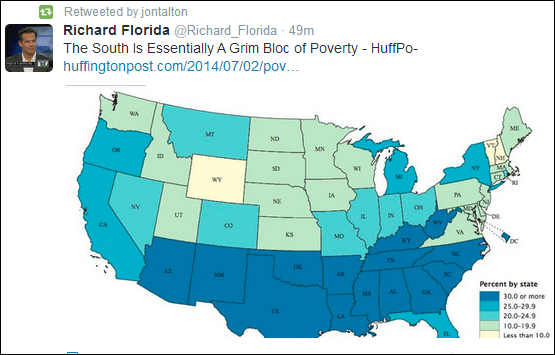 There you see the Grand Canyon state as the westernmost edge of the grim block of deep South, deep blue states deepest in poverty.  Of course we have a significant population living under the poverty line and we need to do better, but is it worse than in our neighbors to the north and west and is it as bad as the ingrained images we have of the rural, deep South?  And, is it somehow related to being on the southern border.

Digging behind the headline, the map and the articles gives us some better perspective on the issue.

Let's begin by defining what that map shows.  It shows that more than 30% of Arizonans (and people in the other deep blue states) live in census tracts where the poverty rate is 20% or greater.  A census tract is a very small population area (between 1,200 and 8,000 people, generally).  Thus, we are looking at a measurement of how concentrated the state's population is in "poverty areas" - two states could have the same percentage of people living with an income below the poverty threshold and still end up with different shades of blue depending on how economically diverse the neighborhoods are.

The first anomaly - and perhaps most importantly - is the time period being measured.  The map above shows a snapshot of 2010, and the article - and the Census report on which it is based - is comparing the increase in people living in poverty areas between 2000 and 2010.

Hmmm, 2010.  Wouldn't that be at the height of the foreclosure crisis and the Great Recession (I don't like that moniker, but it has become the most widely-used)?  The one that hit Arizona and some other previously-booming Southeastern states particularly hard?  AND, the year that Arizona was in the midst of the SB1070/illegal immigration enforcement conflict?

The Huffington Post article does acknowledge the 2010 period, but then repeatedly uses words like "today" and verbs in the present tense to give the impression that nothing has changed in the past four years.  (Of course, most Democrats and many media outlets would dispute that by showing the job growth numbers from 2009 forward.)

Arizona's economy certainly has improved since the depths of the crisis and it would be interesting to see a new map with 2014 rates.  However, we might not see refreshed statistics for awhile.

The second thing that jumps out is how and where Arizona increased.  Here are the county-level maps (from the Census report on which the news articles are based)  for Arizona (and the rest of the country, so that you can see the legend, title, source, etc.): 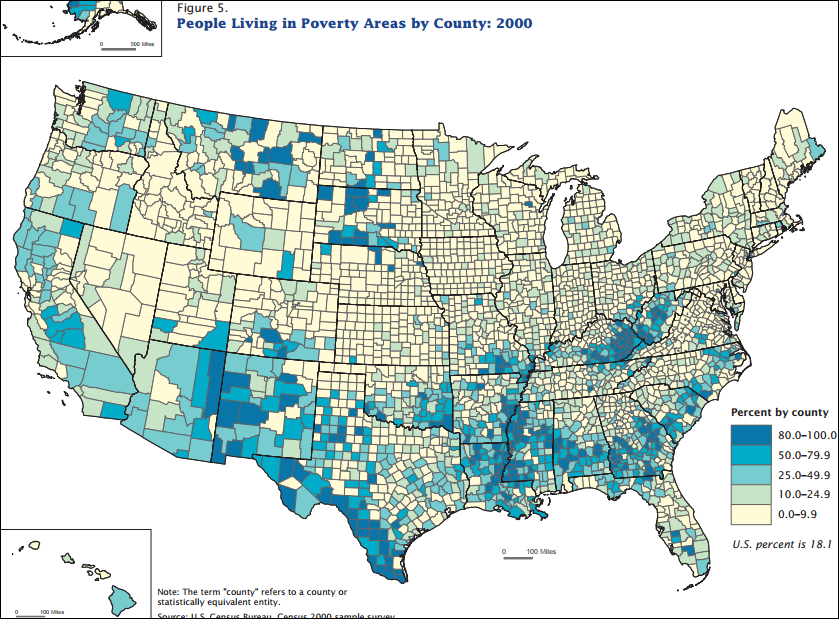 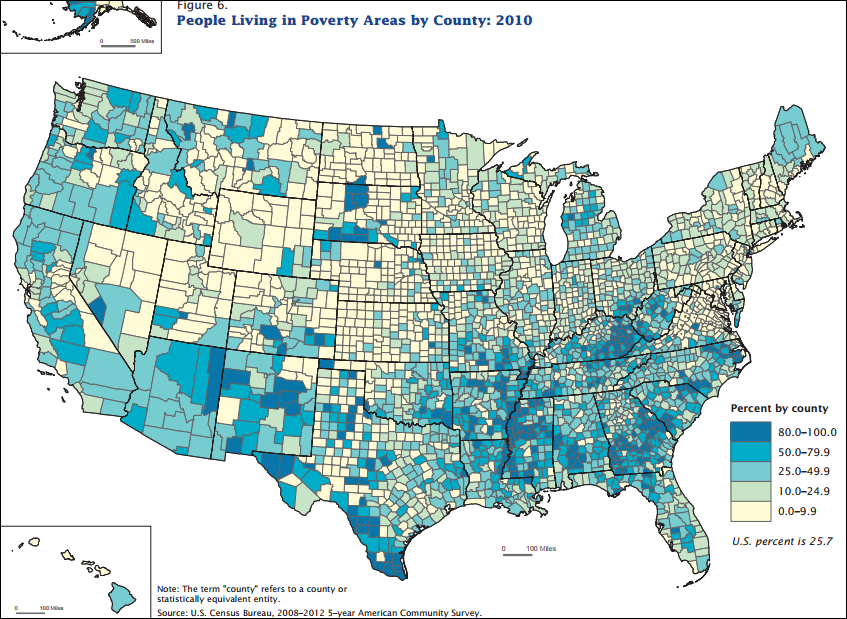 While a couple of Arizona counties moved from one category to another (higher) category, Maricopa County - far and away the state's most populous - jumped from "0 - 9.9%" to somewhere in the "25.0 - 49.9%" category! In other words, the percentage of the population of the Phoenix area living in a census tract with at least one-fifth of its residents in poverty climbed somewhere between 15.1 and 49.9 points.

Although it likely did not happen, the rest of the state could have improved while conditions in Maricopa County worsened to the extent that Arizona looks like it joined "the South".

Maricopa County was the also the epicenter of the illegal immigration enforcement universe (e.g. Sheriff Joe Arpaio) in the couple of years before 2010, and a number of undocumented immigrants who had been living and working in Maricopa County were leaving as a result of the recession and the enforcement; that undoubtedly added to the slowdown of the Maricopa County economy (and thus, the income levels of people remaining in the county).

We welcome your comments about this post. Or, if you have something unrelated on your mind, please e-mail to info-at-arizonaspolitics-dot-com or call 602-799-7025. Thanks.
Posted by Mitch M. at 6:27 PM

The original Huffington Post has to much of a focus on census data - which, as you correctly point out, is out-of-date - and fails to consider economic trends. The two biggest sectors for economic growth are information technology/social media and energy. And the two largest centers for energy development are North Dakota and Texas. Growth in energy means that Texas cannot be considered as part of a block of poverty. Another factor that most observers overlook is the coming economic boom in Mexico. This boom, which will almost surely take place, is due to a convergence of economic reforms and competent and forward-looking executive leadership in Mexico. The two states best placed to take advantage of the coming economic boom in Mexico are Texas and Arizona. We need to get past the current concerns about illegal immigration and drug violence and think about how Arizona, and specifically southern Arizona can benefit from this economic boom.

Thanks for the interesting comment, P-M FSO. An economic boom in Mexico would be welcome; you're right, Arizona should be poised to prosper from it if/when it happens. So, by "we need to get past...", do you mean that we need to solve them, or do you mean we need to stop worrying about them?

I hope the illegal immigration problem will continue to decline with economic growth and a lower birth rate in Mexico. (The problem is now centered in Central America.) I also hope that the drug violence will be alleviated with economic growth and a different Mexican Government approach to dealing with the cartels (as the targeting strategy against cartel leaders had the unfortunate side effect of increasing violence as subordinates fought over control).