Arizona's nine Congresspeople filed their campaign finance reports for the second quarter, and the results varied widely.  From only $9,500 in the bank on June 30 (Franks) to a war chest of $1.35 million (Pastor), and from $24,000 raised during the three months (Franks) to a haul of nearly $400,000 (Sinema), the reports reflect the differing natures of the Congressional Districts and the priorities of the Representatives. 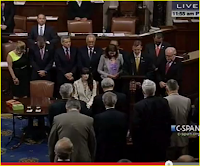 Arizona's Politics has already profiled the finance reports of the incumbents and challengers in CD9 (Sinema) and CD2 (Barber), and will do so for CD3 (Grijalva).  But, here, in order of monies raised, are some basic numbers and notes for the nine incumbents.

Sinema:  The first-term Democrat in the closely-divided metro Phoenix CD9 is preparing for a difficult contest against whichever of the four (currently-announced) GOP candidates emerges from the primary.  She raised $387,557.12 in the 2nd quarter, bringing her total to more than $712,000.  More importantly, her cash on hand grew from $307,000 at the beginning of the quarter to nearly $550,000 on June 30.  As noted in the previous article, she raised approximately $55,000 (14%) in the 2nd quarter from PAC's and other political committees; approximately an additional $90,000 reported on the same line was actually small, individual contributions funneled through conduits such as Act Blue and the Democratic Congressional Campaign Committee ("DCCC").  Not all of the candidates received such pass-through contributions.

Kirkpatrick:  The second-time first-term Democrat representing much of northern and rural Arizona has also been targeted by the national Republicans (the National Republican Congressional Committe "NRCC"), and she is preparing for a difficult race - although no Republican has officially filed to oppose her.  Kirkpatrick collected $311,410.04 in the second quarter ($631,000 for the election cycle), and nearly doubled her bank balance from $245,000 to more than $450,000.  She received approximately $47,000 (15%) in PAC contributions in the quarter, as well as a $2,000 personal contribution from the House Minority Leader, Nancy Pelosi.

Gosar:  The second-term Republican representing much of northwestern Arizona, Gosar is filling his coffers by drilling fellow dentists around the country for contributions.  Probably close to half of his $78,690.50 in 2nd quarter contributions were from his dentistry colleagues, bringing his total to $141,264.94.  He also received $5,000 each from the leadership PAC connected to House Majority Leader Eric Cantor and from Koch Industry-related PACs.  In total, approximately 34% were from PACs and other political committees.  His cash on hand jumped from $51,188.28 to $82,897.94;  it would have been substantially higher but for the $26,900 his campaign sent TO the NRCC.  (Gosar has one announced Democratic opponent, but he has not filed a finance report to report on.)


Grijalva:  The long-time southern Arizona Congressman raised $65,000 this past quarter, bringing his total to more than $146,000.  Approximately 69% came from PACs and other political committees, and his bank balance grew slightly from $49,000 to $58,000.  Grijalva has two announced Republican challengers, and we will file a report on their reports separately.

Franks:  The long-time West Valley Congressman has no announced opposition, and does not appear to be concerned with his fundraising at this point.  He raised just $25,000 ($67,000 total), and raised his cash on hand from just $2,848.00 to $9,496.68. 60% of the quarterly receipts came from PACs and other political committees.