New signs that sprouted up during the Independence Day holiday around Ahwatukee, the Arcadia are and central Phoenix kick the Phoenix City Council race between incumbent Councilmember Sal DiCiccio and challenger Karlene Keogh Parks into a new dimension.  The signs pretend to be supporting the incumbent, but are claiming that "lobbyists" and "developers" are behind DiCiccio - two groups that candidates do not generally put front and center.

DiCiccio (City Council District 6) has claimed that Government Union Bosses (his term and his caps) are the ones out to prevent him from winning re-election, and has pointed - as recently as today - to the Campaign for Better Neighborhoods ("CBN") as evidence (see, DiCiccio's Facebook page). 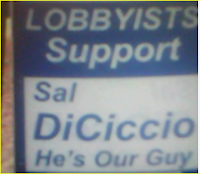 But, the signs are put up by a new political committee called "Phoenix Truth and Safety" ("PTS") that is upfront about its origins.  The signs disclose at the bottom "Paid for by Phoenix Truth and Safety with major funding provided by Arizona's Firefighters, 61 E. Columbus ave (sic) Phoenix AZ 85012; Contact Don Jongewaard 602-277-1500.  Not authorized by any candidate or candidate's committee."

Unlike CBN, PTS has filed with the City of Phoenix Clerk's Office as a Political Committee.  (The Statement of Organization is reproduced below.)  The Chair of the group is Don Jongewaard, the President of the Tempe chapter of the Professional Firefighters of Arizona, and the Treasurer is Anthony Butch, a Glendale firefighter listed as a Staff Representative for the PFFA.  The listed address for PTS is the headquarters for the PFFA.

The PTS website is a compendium of all of the attacks against DiCiccio from various sources.

The new signs are more clever than usual, considering that they came days after the "firefighters", "police" and "paramedics" supporting Parks signs blanketed the district, and that they almost - but not quite - mimic DiCiccio's signs' color scheme.  The tactic does have some risk, in that signs are generally used chiefly to bolster name recognition - and these signs only display the name of their intended target.  Not everyone reads - or, thinks about - the message of the sign, though the name may stick in their brain.

The new wave of signs comes less than one month before early ballots are mailed to voters for the August 27th election.  (It also comes only a few days before a Maricopa County Superior Court hearing (July 8) on a lawsuit filed by DiCiccio opponents claiming that he violated campaign finance laws surrounding surplus funds raised when he was the target of a recall effort in 2011.)