Hagel told the Committee that there were difficult decisions that could be second-guessed.  However, he repeatedly defended against Republicans' claims that the exchange increases danger to U.S. troops.  "If I believed it was going to increase the risk to our soldiers, I would've never, ever signed off on it," said Hagel.

Franks' reply: "I don't doubt your sincerityin that regard, sir; but I do, profoundly and with all due respect, doubt your judgment on that front."  To which, Hagel conceded "That's fair." 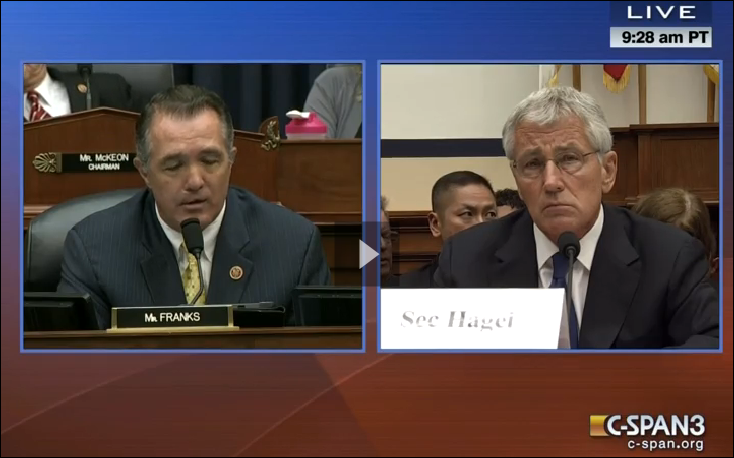 Moments later, Barber had his five minutes to question Hagel and/or Defense Department General Counsel Stephen Preston.  (Contrary to many hearings in Congress, Hagel did not get gentle questioning from a Democratic Representative.)

Barber said he "found it hard to believe that these individuals in their positions in the Taliban government had no role in attacks on Americans," and he pressed on whether the U.S. "could have gotten a better deal" than releasing the five former Taliban leaders.  Hagel reiterated that "there are risks" that we needed to mitigate, and that "we think we've done that." 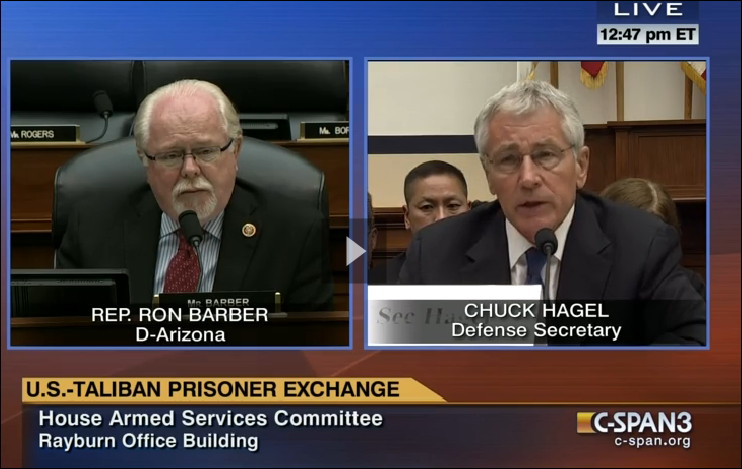 (Also interestingly - shortly before Franks and Barber's turns in the questioner role - there was a discussion about a signing statement that President Obama had issued when he signed the law requiring the Administration to give notice to Congress before the release of Gitmo prisoners.  The statement indicated that the Administration believed the law was an unwarranted intrusion onto the Executive Branch's powers.  The discussion had echoes of the uproar over signing statements that previous President George W. Bush had tacked on to a number of laws.)

We welcome your comments about this post. Or, if you have something unrelated on your mind, please e-mail to info-at-arizonaspolitics-dot-com or call 602-799-7025. Thanks.
Posted by Mitch M. at 10:20 AM