Politico is reporting that Arizona Rep. Raul Grijalva (D-CD3) has endorsed former state Rep. Ruben Gallego in what is expected to be an intense Democratic primary to replace the retiring Rep. Ed Pastor (D-CD7).

The in-person endorsement at a Tuesday night fundraiser in Phoenix apparently surprised Gallego.

Gallego has already resigned from his state legislative post.  Announced candidate and State Senator Steve Gallardo has not yet resigned.  There are a number of other individuals who have either announced their candidacy (Cesar Chavez) or are still considering it. 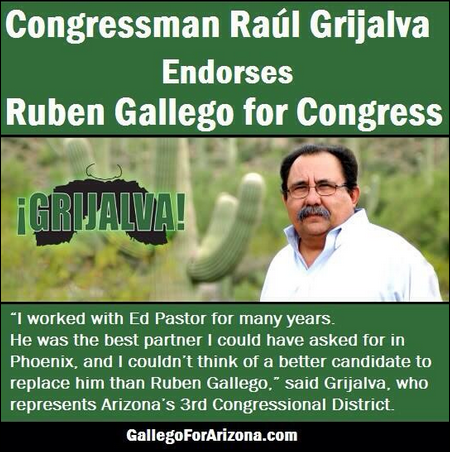 can someone report on this https://twitter.com/search?src=typd&q=gallegosforreal