Former Arizona Rep. Gabby Giffords did not get doused in the viral social media craze that the Strike Out ALS Ice Bucket Challenge has become, but she did help turn the bucket on husband and former Space Shuttle Commander Mark Kelly.

Per the "rules", Giffords and Kelly then paid it forward by challenging NRA President Wayne LaPierre to either douse himself within 24 hours or make a material donation to the ALS Association, to help research a cure for the debilitating disease.

In the video challenge to the head of the National Rifle Association, Kelly states that "we do hope that, one day, we can agree upon more than just supporting ALS (Association) and Lou Gehrig's disease research."

Following her assassination attempt in 2011, Giffords and Kelly have founded and built up Americans for Responsible Solutions "to encourage elected officials to stand up for solutions to prevent gun violence and protect responsible gun ownership."

The Ice Bucket Challenge just became associated with the ALS Association a few weeks ago, but in that time, more than $41.8 Million has been contributed - compared with $2.1M during the same period in 2013! Here is how you can donate - you can donate AND dump ice on your head or you can do either, but you CAN'T do neither! 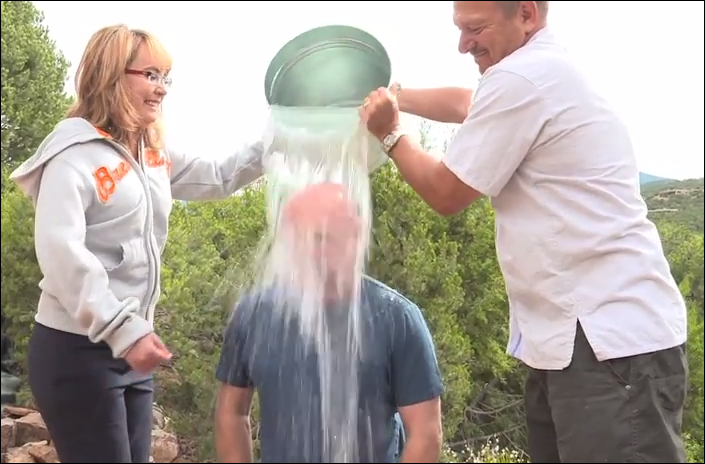 We welcome your comments about this post. Or, if you have something unrelated on your mind, please e-mail to info-at-arizonaspolitics-dot-com or call 602-799-7025. Thanks.
Posted by Mitch M. at 10:18 AM