Four weeks before election day, California Attorney General Kamala Harris' office issued arrest warrants today for the two founders of the Phoenix New Times, Michael Lacey and Jim Larkin. They are charged with conspiracy to commit pimping because of their spinoff company, Backpage. 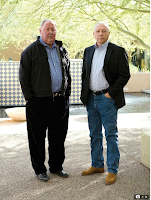 Backpage's CEO, Carl Ferrer, was arrested today on those charges plus nine additional counts related to pimping underage children and other alleged felonies in connection with the operation.

The criminal complaint (below, along with Declaration detailing the investigation) claims that Backpage was earning gross revenues of more than $2M per month in California alone, and supporting documentation states that one week in 2015 saw worldwide revenues of $3.1M. California claims that 99% of those revenues are attributable to adult services.

Larkin and Lacey split off Backpage from the Phoenix New Times and other weekly publications in 2012, and indicated that they were staying with the new Backpage entity. The California AG claims that they essentially took over the space vacated at around the same time when Craigslist decided to stop accepting similar ads.

To the best of our knowledge, the last time the pair had arrest warrants out for them - and, got arrested - was in 2007, when Maricopa County Sheriff Joe Arpaio and then-County Attorney Andy Thomas worked together to cuff and book them for misdemeanor charges that were later proven to be false. Maricopa County ended up paying $3.75M to settle those false arrest charges.

California AG Kamala Harris is running for a U.S. Senate seat from California, and is favored to win.

(Three months ago, the Wall Street Journal published this interesting article: Is Backpage.com a Champion of Web Freedoms or a ‘Dystopian Hell’?)

Signed Dec for Arrest Warrant Pdf_Redacted by arizonaspolitics on Scribd


We welcome your comments about this post. Or, if you have something unrelated on your mind, please e-mail to info-at-arizonaspolitics-dot-com or call 602-799-7025. Thanks.
Posted by Mitch M. at 5:36 PM