The Maricopa County Board of Supervisors are meeting this afternoon to choose a new Justice of the Peace for West Mesa. Four people reportedly applied for the appointment, after JP Mark Anderson announced his resignation. 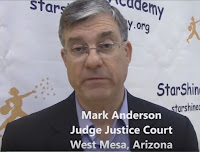 Maricopa County Communications Director Fields Moseley indicates to Arizona's Politics that the Supervisors will be deciding between the two  applicants who actually live in the justice court precinct. He declined to name the men* until after the meeting, set for 3:45pm.

Supervisors Steve Chucri and Denny Barney interviewed the candidates, and will presumably make their recommendation(s) to the other three Supervisors.

Anderson was elected to the JP post in 2010 and 2014, after serving 14 years in the state Legislature. He resigned on October 20, effective January 1, 2017. West Mesa precinct residents had two weeks to apply to replace him for the remainder of his four year term.

*Moseley did describe the candidates as "men".


We welcome your comments about this post. Or, if you have something unrelated on your mind, please e-mail to info-at-arizonaspolitics-dot-com or call 602-799-7025. Thanks.
Posted by Mitch M. at 2:56 PM