More than 6 years after former Attorney General Tom Horne may or may not have illegally coordinated with an independent expenditure effort, the Arizona Supreme Court today unanimously tossed the $1.2M fine against him because of due process violations. The Court found that Arizona laws improperly gave Special Prosecutor Sheila Polk both the investigatory and adjudicative powers over the case. 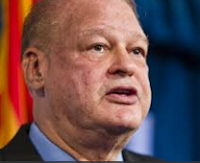 Ironically, the Supreme Court hands the decision on whether to start from scratch to the man who defeated Horne in the 2014 GOP primary, AG Mark Brnovich.

In 2010, Horne benefitted from an independent expenditure campaign led by friend Kathleen Winn. (Republican) Then-Secretary of State Ken Bennett found that there was reasonable cause to believe that Horne had improperly coordinated with Winn (who had previously been involved with his committee). Then-Attorney General (and Democrat) Terry Goddard appointed Yavapai County Attorney (and Republican) Sheila Polk as the Special Prosecutor to investigate.

After Polk's finding that Horne and Winn did violate Arizona statutes, Horne appealed the fine to an Administrative Law Judge. The ALJ found in favor of Horne, but Polk rejected the ALJ's opinion. Horne then appealed that rejection to the court system.

The Supreme Court, with new Justice Clint Bolick authoring the opinion, found that the law violates Due Process rights - it is set up slightly differently from federal laws setting up special prosecutors.


Here, the combination of prosecutorial and adjudicative functions not just in a single agency but in the same official presents “special facts and circumstances” creating an intolerable risk of unfairness. The initial determination of a legal violation here was not akin to a judge finding probable cause to proceed to trial and then reaching a final decision after an adversarial process in which the judge was not an advocate. Rather, under the statutory scheme, the Secretary of State made the probable cause finding. Polk then commenced investigation and issued a lengthy decision finding a legal violation and ordering compliance, which would have been a final determination had Appellants not appealed. In the subsequent ALJ proceeding, Polk admittedly “was involved with the prosecution of the case, by assisting with the preparation and strategy.” Thereafter, she issued a final administrative determination affirming her prior order and rejecting most of the ALJ’s conclusions of law. So we have here not only a single agency performing accusatory, advocacy, and adjudicatory functions, but the same individual performing all three functions. As Withrow characterized the circumstances in Murchison, “the judge in effect became part of the prosecution and assumed an adversary position.” Withrow, 421 U.S. at 53. Beyond even that, Polk was in the position to affirm the very determination and order that she initially issued. See also id. (describing denial of due process where judge could rely on his own “[personal] knowledge and impression . . . that could not be tested by adequate cross-examination” (internal quotation marks omitted)).

No word yet on how AG Mark Brnovich will proceed.