Arizona Senator Jeff Flake (R-AZ) was one of the first GOP Senators to publicly question President Donald Trump's firing of FBI Director James Comey on Tuesday, but today he is on the front cover of Politico as one who will not "buck Trump" on the matter. 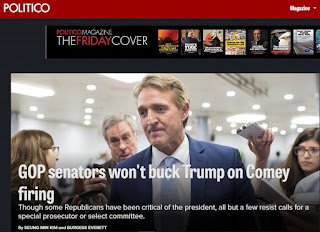 Here is Politico addressing the situation, and the Flake quote regarding whether or not there should be an independent (or, special) prosecutor named to conduct the investigation of any possible Trump campaign-Russia ties:


Even Republicans who’ve criticized the timing behind the abrupt firing aren’t yet willing to trigger a confrontation with the Trump administration by demanding an independent counsel.

“I say, let’s see who he nominates to replace Comey,” Sen. Jeff Flake (R-Ariz.), who tweeted after Comey’s firing that he could not find an “acceptable rationale” for its timing, said of a special prosecutor. “You never rule anything out, but I’m not going there. I don’t want to jeopardize the Senate investigation going on.”

It’s a familiar dance between Donald Trump and the congressional GOP: Trump does something widely seen as a brazen violation of political norms. Even as some Republicans call him out, most defend Trump’s actions or decline to take action directly challenging his administration.

The article goes on to note that Arizona's other Senator, John McCain (R-AZ) has called for an independent investigation.