In what might be seen as a major testing of the waters, the Democratic Congressional Campaign Committee listed Rep. David Schweikert's solid Northeast Valley District as a 2018 target district. The DCCC seems to be banking on a major rip tide in urban/suburban districts in response to the Trump Presidency. 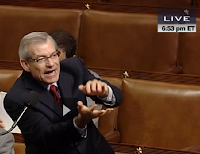 No major ratings change appears to have precipitated listing #AZ06 in its addition of 20 Congressional districts where they are going to work on "recruitment and possible investment."  The Cook Political Report, for example, still lists the district as "solid Republican".  Schweikert is serving his 4th (consecutive) term representing Arizona.

Schweikert won re-election last November with 62.1% of the vote, while Donald Trump only secured 52.4% of the vote (to Hillary Clinton's 42.4%)) in the same district. Attorney Garrick McFadden filed last month to run as a Democrat against Schweikert.


“The DCCC is falling victim to its own inside-the-Beltway hype, just like last cycle when the Democrats failed spectacularly to make any significant gains. The truth on the ground is, David Schweikert is well-known and respected as a trusted fighter for Arizona families. We have no doubt Congressman Schweikert will continue to enjoy the confidence of voters who have consistently sent him to fight on their behalf.”

The DCCC and the NRCC - its Republican counterpart - of course are going after each other's swing districts in Arizona. Those are Rep. Tom O'Halleran (D-CD1) and Rep. Martha McSally (R-CD2). Cook lists both in the "Lean" columns for their respective incumbents.

(This is a developing story. Arizona's Politics has reached out to several sources for comment and will update as necessary.)

We welcome your comments about this post. Or, if you have something unrelated on your mind, please e-mail to info-at-arizonaspolitics-dot-com or call 602-799-7025. Thanks.
Posted by Mitch M. at 10:51 AM