The Maricopa County Recorder's office announced late Friday night/early Saturday morning that their boss, Helen Purcell, had survived a close primary battle by 185 votes. Today (after returning to town), the political newcomer who nearly knocked off the 27-year veteran called her to congratulate her and to tell her he would not be contest the outcome. 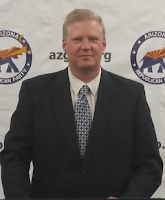 Aaron Flannery told Arizona's Politics this afternoon that he will continue to be active and will lend his fresh set of eyes to issues however he can be helpful.

Purcell's office came under local and nationwide scrutiny this year when incredibly long lines for the March Presidential Preference Election lasted all day and into the wee hours of the night. A lawsuit resulted and the portion about the polling place allocations may be near settlement for November's election. She has also been criticized for other ballot mishaps over the past few years.


We welcome your comments about this post. Or, if you have something unrelated on your mind, please e-mail to info-at-arizonaspolitics-dot-com or call 602-799-7025. Thanks.
Posted by Mitch M. at 3:08 PM