GOOD FOR THE GOOSE, GOOD FOR THE GANDER: Biggs Preparing To Try To Add His Votes If Judge Lets Jones Add Hers Tomorrow (#AZ05Recount)

Earlier today, Christine Jones' campaign sent out a plea to people who gave her emails: Let us know TODAY if your early or provisional ballot was counted! This afternoon, Andy Biggs' camp sent out a similar blast to its supporters. Good for the goose, good for the gander. 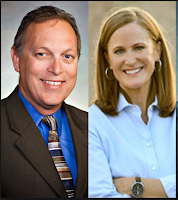 So, if Maricopa County Superior Court Judge Joshua Rogers decides at tomorrow's hearing (10:30am) that the County Elections Department should open and count ballots that it had held out for various reasons, each side will be prepared to present a list of their (likely) supporters who want their ballot envelopes re-checked and counted. They may even ask some of them to come to the hearing to explain to the judge why their vote should be counted.

If the judge orders some or all of them included, whoever has the bigger list might have a head start as the 9-vote primary election contest goes into automatic recount mode.

At 9:10 this morning, Ms. Jones - who is currently 9 votes behind for the GOP nomination for CD5 (East Valley) - sent out the following email urging people to check online to see if their early or provisional ballot was counted, and if not to contact them by midnight tonight.

The seven days since Election Day have been a flurry of activity... here is the latest:

1) On election night, we had a 1.3% edge over Andy Biggs with 100% of the precincts reporting. Statistically, there was no clear path to victory for our opponents.

2) As of Friday night (the final night of counting ballots), Andy Biggs somehow, beyond all mathematical probability, edged us by just 9 votes. That makes this the closest congressional election in modern Arizona history. This means, by Arizona Statute, that there will be an automatic recount.

3) Seeing that the vote was so close, we looked closer at all ballots cast, and found that more than 300 ballots have not been counted for various reasons. As you know, voting is a constitutional right and we have taken this issue to court to ensure every vote is counted.

4) We believe your vote should count! Please do the following:

- To check if your provisional ballot was counted: http://recorder.maricopa.gov/provisionalballotstatus/

PLEASE do this ASAP. We need to know about ANY votes that were not counted by tonight (Wednesday) at midnight.

If you find that your vote was not counted, please reply to this email immediately.
Sincerely,

PS: Please forward this email to anyone you know who is our supporter. Please do it NOW! Thank you.
Biggs' attorneys and campaign management quickly realized that what is good for the goose would also be good for the gander. Their remarkably-similar email hit inboxes at 3:10pm, and only gave people 2 hours to let them know.


Dear Friend,
9 votes - that's all that separates me and my next closest opponent Christine Jones in the race to replace Matt Salmon in the United States House of Representatives.
Because of the closeness of the vote, there will be an automatic recount and legal challenges before the election is officially over.
There are several early ballots and provisional ballots that may not have been counted - and one of them could be yours! These early and provisional ballots are being called into question in an ongoing court case, and we want to make sure that all who have voted legally have their votes counted.
It's important that you check now to see if your early or provisional ballot was counted!
You can check to see if your early ballot was counted by clicking here.
You can check to see if your provisional ballot was counted by clicking here.
Call Daniel Stefanski at 623.451.1729 or Cesar Ybarra at 619.843.3434 if you believe that your ballot did not count.
You have until 5 pm tonight to resolve this issue if your ballot did not count. Time is of the essence!
Thank you for your support!

Andy Biggs
The differences between the two emails that jump off the screen are that the Jones campaign - in the  P.S. indicates that it is looking especially for "supporters", and that while both say they want your votes to count, the Jones email does subtly point out that THEY brought this case to court to stand up for people's right to vote.


We welcome your comments about this post. Or, if you have something unrelated on your mind, please e-mail to info-at-arizonaspolitics-dot-com or call 602-799-7025. Thanks.
Posted by Mitch M. at 4:01 PM