Here is the text of the ad, as transcribed by Arizona's Politics, with a description of the visuals in parentheses:


For years, Paul Penzone was the face of Silent Witness.  (Black/white photo of Penzone, his name gets typed in.)
But, in 2003, Paul Penzone pushed his then-wife against a door, injuring her in front of their child. (Ominous photo of man at top of stairs with what looks like a saw in hand, woman below with black eye. Then, typed out quotes from Ms. Penzone's application for Order of Protection: "He was intimidating and terrifying me", "He pushed me into the door.")
He's tried to explain it away, but there's no excuse for hitting a woman.  (Penzone photo, with police lights flashing.)
Now, the only silent witness is his ex-wife.   (Photo of woman with head in hands.)
We deserve better than that.  ("We deserve better than Paul Penzone.  If you or a loved one has been the victim of domestic violence, call your local police.")

Here is a copy of the statement from the Arpaio campaign: 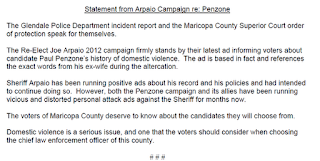 There are several problems with Arpaio's powerful ad:
1)  The basic details of the incident are very much in dispute.  It was a he-said, she-said situation, no charges were filed, Paul Penzone was the one who called the police while his then-estranged wife said that she had started to but decided to talk with her attorneys first, she did not tell the officers that day about being "intimidat(ed) and terrif(ied)", the dueling Orders of Protection were quashed, the parties were awarded joint custody.  This ad states the push as an adjudged fact, when it is far from that.
2) The powerful visual of the violent man and the towered-over woman with a black eye is an extremely prejudicial image and is unwarranted given the Penzone narrative.
3) Ad claims he had no excuse for "hitting a woman", but the alleged push is not the same.  An exaggeration should not have been necessary.
4) Claiming the "only silent witness is his ex-wife" makes it appear that Susan (then) Penzone has somehow been silenced.  She has not, although she did decline the New Times' request for a comment several months ago.
5) The final graphic about domestic violence is designed to add a public service announcement element to this negative ad. Clever, but also an exaggeration that implies that there was a verdict against Penzone.

Presenting a disputed and unadjudicated incident as fact - without indicating that there is doubt - is a problem.  That is different than airing an opinion, which everyone should welcome.  This is a candidate becoming a judge and jury, and finding serious and emotional accusations against an individual to be fact.  The parties themselves and the legal system did not adjudicate the competing narratives and, thus, found them to be in dispute.

This misrepresentation is serious enough.  But, to then exaggerate the accusations to make it even more dramatic was unnecessary, egregious and designed to inflame the new jury (i.e. the voters).

We welcome your comments about this post. Or, if you have something unrelated on your mind, please e-mail to info-at-arizonaspolitics-dot-com or call 602-799-7025. Thanks.
Posted by Mitch M. at 3:05 PM

When Joe loses this case in court, are the taxpayers on the hook for damages AGAIN. Haven't we had enough of this "birther clown"?

Domestic violence bill is not something out of the blue moon, rather our religion Islam says the same. Most of our laws face failure due to implementation and I can see there is not link difined between the Police and Protection Officer. However, wish all my countrymen good luck with this.