Reuters published an article this afternoon about how Donald Trump's campaign has benefitted from not paying "at least 10 top staffers, consultants and advisers". In so doing, the article may have exposed an important campaign finance law violation.*

The self-declared "King of Debt" 's (aka Donald Trump) campaign committee is required to regularly disclose all debts that it either owes to others or that are owed to the committee. While the Reuters article notes that some of the top-level staffers (etc) may have been volunteering their time - as unusual as that may be - the reporters did get a hold of Michael Caputo. Caputo told the reporters yesterday that he has sent the committee invoices for his unpaid work. 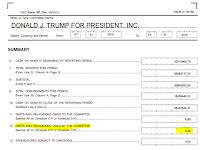 Caputo resigned from the Trump campaign 2 1/2 months ago following his "Ding dong the witch is dead" tweet (following the resignation of Corey Lewandowski, following...).  The monies have been owing since at least that point, and the Trump campaign committee has filed two reports to date which included ZERO debts owed by the committee. (Example at right)

It was only the month before that Trump had declared himself to be the "King of Debt" (See video below) His campaign committee does not appear to be as in tune with the requirements of their boss's moniker.  Campaign finance law clearly requires that all debts must be reported, whether or not they are disputed. (Even the reasoning behind such a requirement is obvious to anyone who has been paying any attention to this campaign: it is important to know the persons or entities that the committee may be in debt to or that may be in debt to the committee.)


*The article does lay out other possible campaign finance law when it notes that two committee staffers immediately jumped to a pro-Trump SuperPAC.

We welcome your comments about this post. Or, if you have something unrelated on your mind, please e-mail to info-at-arizonaspolitics-dot-com or call 602-799-7025. Thanks.
Posted by Mitch M. at 2:48 PM