Whether it is a simple link or an item that does not need a longer article - if it is short, we'll put it here.  Check back periodically during the day for new shorts, and/or drop your own shorts in the comments.

7)  KUDOS to Arizona Republic reporter Mary Jo Pitzl and BOOS to the Associated Press and the Arizona Capitol Times, for their handling of the news release from Arizona Secretary of State-and-candidate-for Governor Ken Bennett.  Bennett's office trumpeted the conviction of a Bullhead City woman for voting twice in the 2010 election.  The news release did not mention the party affiliation of the woman, even though the voter fraud issue has been widely seen as a partisan effort by the GOP to suppress Democratic-leaning voters.  Pitzl reported that the convicted woman is a Republican; the Capitol Times ran an AP short version, which did not mention the party affiliation. (It was not difficult to learn the party affiliation; Arizona's Poltics did so quickly yesterday.)

6) 10:41am: JUST NOW: House does NOT vote on Benghazi Select Comm after debate. Postpones.

5) Sen. John McCain (R-AZ) popped into a committee hearing to express support for President Obama's nominee to head up the Department of Health & Human Services.  Shockingly, he referred to nominee Sylvia Matthews Burwell as his "friend".  h/t to The Hill

4) Clever way to get you to visit their website: Mesa Mayor-and-candidate-for-Governor Scott Smith looked a lot different when he took shots on his high school basketball team, and his campaign is using that in an email to get you to click to his website.  Try to guess which 1974 Westwood hoopster is now running for Governor - it is an irresistible challenge. (I picked the wrong guy.)  The picture is below.  (Amazingly, they do not seem to try to tie it in with Smith's appearance next week with former Phoenix Suns Kevin Johnson and Tom Chambers)

3) Rep. Ron Barber (D-CD2) had a Proud/Not Proud kind of night last night.  He trumpeted the late-night passage of his amendment in the House Armed Services Committee which gave a one-year reprieve for the A-10 fighter planes (key to Davis Monthan AFB).  He was silent about being one of only 6 Democrats to join with Republicans in holding former IRS official Lois Lerner in contempt of Congress and calling for a special counsel to continue investigating.

2) An email from state House Speaker-and-candidate-for-Congress Andy Tobin made Politico's list of examples of Republicans fundraising based on their push for a Select Committee investigating Benghazi.  The email - as received by Arizona's Politics - is reproduced below the jump. 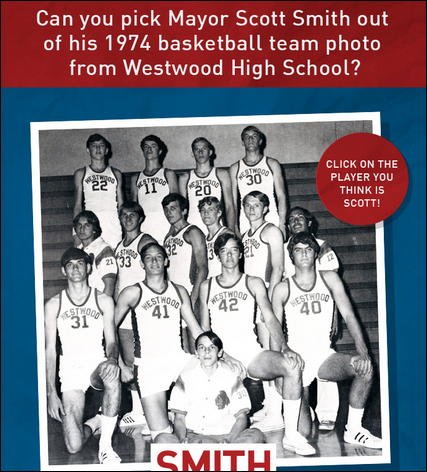 We welcome your comments about this post. Or, if you have something unrelated on your mind, please e-mail to info-at-arizonaspolitics-dot-com or call 602-799-7025. Thanks.
Posted by Mitch M. at 9:56 AM