New House Majority Leader Kevin McCarthy is hoping to raise a lot of money for the GOP's three Arizona challengers in swing districts when he drops by Phoenix's Seasons 52 restaurant for lund tomorrow (Sept. 24). 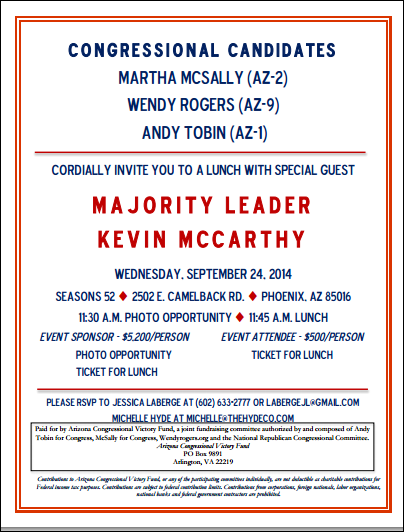 State House Speaker Andy Tobin, Martha McSally and Wendy Rogers have formed the "Arizona Congressional Victory Fund" joint fundraising committee with the National Republican Congressional Committee ("NRCC"), which means that although the lunch ticket tomorrow is $500, the maximum contribution for an individual or political committee is $40,200.


We welcome your comments about this post. Or, if you have something unrelated on your mind, please e-mail to info-at-arizonaspolitics-dot-com or call 602-799-7025. Thanks.
Posted by Mitch M. at 11:49 AM