"Others May Have Gone Beyond That Somehow"; "Funding Issues" Suspected As Reason Phoenix Won't Be Hosting 2016 GOP National Convention

Phoenix was eliminated today as a potential host for the 2016 Republican National Convention, and the Phoenix committee which made the bid thinks "funding issues" were the cause.

Columbus, Ohio was also eliminated from the search for the perfect host city, leaving Las Vegas, Dallas, Denver, Kansas City, Cincinnati and Cleveland in the hunt.

Committee chair (retired) Sen. Jon Kyl tells Arizona's Politics that "we said we would raise what was necessary; others may have gone beyond that somehow."

The funding issue could end up being particularly thorny for whichever city is picked.  Last week, the Republican National Committee casually mentioned that the host city might be expected to fundraise to replace the $18 Million that the party received from voluntary tax contributions which will not be received this year.

RNC's Site Selection Committee Chair Enid Mickelson did give Phoenix and Columbus a little praise in the release announcing their elimination.  "“In any other year, Columbus and Phoenix could have topped the list, but with so many strong cities competing, the committee had to make the difficult decision to narrow the field. Phoenix and Columbus are great American cities, and I hope they’ll pursue a future bid for an RNC convention."

(One of the several sad parts about Phoenix's elimination is that the very clever logo and slogan below will not receive more visibility.) 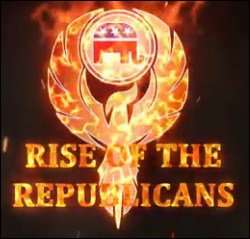 We welcome your comments about this post. Or, if you have something unrelated on your mind, please e-mail to info-at-arizonaspolitics-dot-com or call 602-799-7025. Thanks.
Posted by Mitch M. at 1:20 PM

Wow, 3 Ohio cities were in contention for the 2016 RNC Presidential Convention? On another note, is it also possible that one of the unstated (officially anyway) reasons that Phoenix was passed up was because of Governor Brewer's embrasure of the Medicaid expansion (as well as her veto of the discriminate against gays bill) and this is the RNC's way of punishing Arizona?

Thanks, PJ. Those possible factors make much more sense than the articles that have mentioned the PASSAGE of 1062, and Phoenix's heat! I'm also pondering the process of only eliminating two; what is this - The Voice or American Idol? If it was to cut down on travel (yeah, sure), why not narrow it from 8 to 2/3/4?

If its a travel issue, Ohio is a mess to get in and out of as all of their airports are smaller. I think the only reason why Ohio is even in the running is because of its continuing status as a supposed "swing state". That and maybe because Governor Kasich could be a presidential contender, even if he did embrace the Medicaid expansion as well. But unlike Governor Brewer, he was one of the House "Managers" during the Clinton impeachment trial in the Senate.

Vegas already had the Sheldon Adelson/AIPAC primary this past week, but he alone could fund any convention and really put his mark as the kingmaker. I just don't see Denver or KC getting it. Neither state is really in play and so they don't give much benefit.

As much as I might despise the Republicans, I think they made a huge mistake in eliminating Phoenix as a possible host city.