Yesterday, Arizona's Politics reported on the first $150K+ wave of TV ads from Arizona Treasurer Doug Ducey in his campaign to become Governor, which began airing last night.  The ad was not available online;  it was posted this morning, and it features three sentences from Ducey's speech in February announcing his candidacy.  His message is that he will "stand up to the Obama Administration."

Transcript
Ducey: "For Arizona, the Obama years have been nothing but mandates, lawsuits and lectures. As your Governor, I'll have a very direct message for Barack Obama: instead of trying to control our schools, our healthcare, and our energy industry in Arizona, how about controlling your own spending, your own borrowing and this nation's borders." 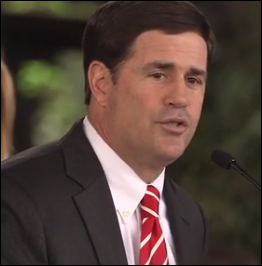