U.S. Air Force Chief of Staff General Mark Welsh took to the National Press Club this morning to explain the logic behind the Air Force decision to eliminate the A-10 fleet of attack planes.

He suggested the decision to eliminate a fleet was made because the FY15 budget for the Air Force is approximately $20B smaller than it had been projected to be just three years ago, and that "trimming around the edges" was not an option.

In 6 1/2 minutes, he goes through the options they considered in arriving at the decision. "It's not emotional.  It's logical. It's analytical. It makes eminent sense from a military perspective IF you have to make these kinds of cuts. Nobody likes it. I don't like it."

The USAF decision is drawing particular attention in Arizona, where the A-10 "Warthog" has long been a key component of Davis-Monthan Air Force Base in Tucson.

It has become a hot-button issue in the re-election campaign of Rep. Ron Barber (D-CD2), as apparent Republican opponent - and, retired AF Colonel - Martha McSally accuses the incumbent of not doing enough to prevent the decision.  A bi-partisan group in Congress is promising to block the fleet elimination. 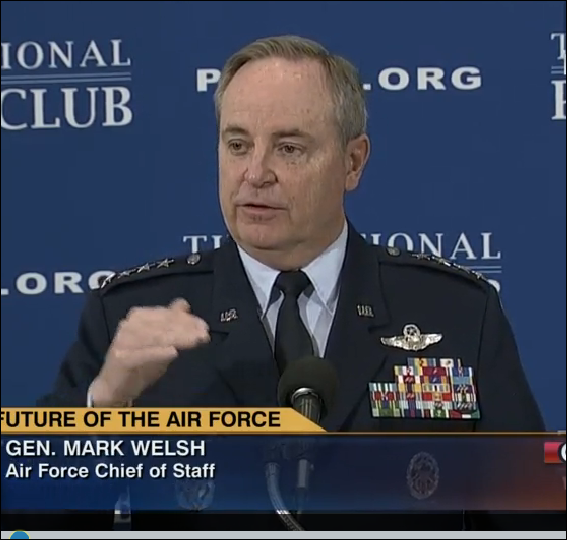 We welcome your comments about this post. Or, if you have something unrelated on your mind, please e-mail to info-at-arizonaspolitics-dot-com or call 602-799-7025. Thanks.
Posted by Mitch M. at 10:28 AM