WATCH: Joe Arpaio Tells J.D. Hayworth That He WON'T Run Against John McCain In '16; Clearer Field For Rematch of '10 Primary!

Former Arizona Congressman J.D. Hayworth had a chance to interview perennial possible candidate-for-higher-office Sheriff Joe Arpaio this week on Newsmax TV, and couldn't resist asking Arpaio if he would consider not running for Governor this year and trying to primary Senator John McCain in two years.

Arpaio strongly denied that he would look at dueling McCain for his "amnesty" support, thus leaving open the possibility of a McCain-Hayworth rematch.  (McCain soundly defeated his former Congressional colleague in the 2010 primary.)

"I've been in Washington three times, I was a Regional Director in Mexico, South America, all over the place," said Arpaio. "I don't want to go back to Washington. I'll tell you one thing, if I don't run for governor, I'm running for sheriff in 2016."

In setting up the McCain question, Hayworth noted "I know you passed up a chance to run for Governor recently."  Arpaio quickly interrupted to correct the confusing record:  "Wait a minute, J.D. I didn't pass it up, that's an error.  I'm still looking at running for Governor."

The error Arpaio refers to is one made by his campaign staff, which sent out email letters from Arpaio indicating that he had decided to run for Sheriff in 2016. 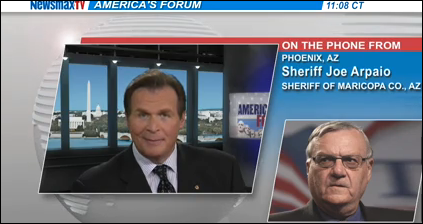 We welcome your comments about this post. Or, if you have something unrelated on your mind, please e-mail to info-at-arizonaspolitics-dot-com or call 602-799-7025. Thanks.
Posted by Mitch M. at 2:29 PM