As if you did not already know this, buckle your seat belts and pop your popcorn - the 30-second ad war in Arizona in the weeks before the November 4 election will be overwhelming.  And, preparations are happening now.

These orders are not final and could be shifted around.  Although they have indicated that half of the Phoenix buy will support Kirkpatrick and half will support Sinema, it is certainly possible that they would adjust the buys depending on the status of the race.  Reserving this amount of spots this far out keeps them from getting shut out - the airwaves WILL be saturated with campaign ads - and may get them preferred rates or slots.

House Majority PAC is largely funded by unions and billionaire Democrats (Jon Stryker, Fred Eychaner, Donald Sussman).  House Majority had $7 Million in the bank on March 31, and the largest donor thus far in the 2014 election cycle is Trust Asset Management (Sussman), with $850,000.

House Majority PAC has already spent more than $570,000 in Arizona in January and April, responding to ads from Republican-philic groups partly funded by the conservative billionaire Koch brothers.

Here is the Super PAC's YouTube page.  As you can see, most - but not all - of the ads are negative ads against the Republicans.  Two of their Arizona ads have received more than the usual amount of news coverage - the ad defending Kirkpatrick's support of Obamacare, and the ads directly attacking the Koch brothers. 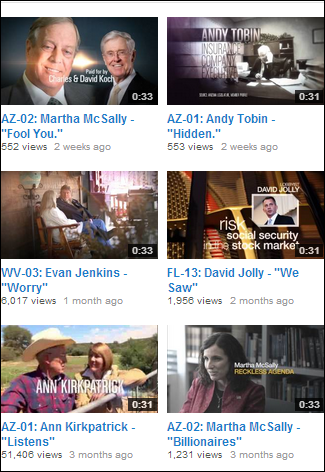 We welcome your comments about this post. Or, if you have something unrelated on your mind, please e-mail to info-at-arizonaspolitics-dot-com or call 602-799-7025. Thanks.
Posted by Mitch M. at 4:31 PM